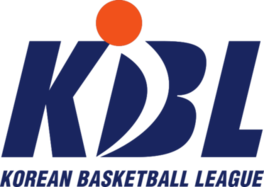 The Korean Basketball League (KBL; Korean: 한국프로농구) is a professional men's basketball league in South Korea which was established in 1997. The league consists of ten teams and each team plays a total of 54 games (27 home and 27 away) in the regular season.

The Korean Basketball League was established in 1997. Prior to the professional era, domestic basketball was an amateur sport and all teams, whether sponsored by a corporate company or a university, participated in the National Basketball Festival (Korean: 농구대잔치), a competition sanctioned by the Korea Basketball Association. Early teams were sponsored by major corporate companies or universities. The Korea Development Bank (KDB) and Industrial Bank of Korea (IBK) established their basketball teams as early as the 1950s and 1960s while Yonsei University and Korea University are considered pioneers of domestic college basketball, having introduced the sport to their institutions before World War II. During the 1970s and 1980s, major industrial companies such as Kia Motors, Hyundai Electronics and Samsung Electronics started their own basketball teams. The predecessor teams of Goyang Orion Orions, Anyang KGC and Wonju DB Promy were founded during the 1990s by smaller-scale companies hoping to take advantage of the "basketball craze".

Sponsoring companies were given the option to register their basketball teams in the upcoming professional league. KDB and IBK opted to sell their teams; however, their new owners chose to re-start the teams as brand new franchises, only acquiring their players and staff but not inheriting the team's legacy or historical records. The founding teams were Busan Kia Enterprise, Gyeongnam LG Sakers, Daegu Tongyang Orions, Suwon Samsung Thunders, Wonju Naray Blue Bird, Anyang SBS Stars, Incheon Daewoo Zeus, Daejeon Hyundai Dynat, and Gwangju Nasan Flamans. Some of the teams, such as Anyang SBS Stars, had been based in Seoul but chose to move to another city. The plan was to have a team based in each geographical region rather than only centralized in the Seoul Capital Area. The 1997–98 season was the first full season played and the tenth team, Cheongju SK Knights, was added as a member. The KBL has had ten teams ever since.

The early years of the league were plagued by the financial instability, exacerbated by the 1997 Asian financial crisis which had impacted South Korea especially hard. As with other domestic sports leagues, the KBL was not immune to the economic fall-out. The KBL had difficulty finding a league sponsor for the 1997–98 season while teams were forced to cut costs. Between 1997 and 2001, five of the ten teams had changed ownership due to financial problems.