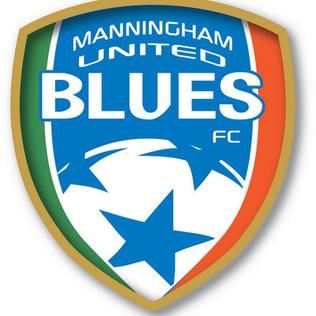 Manningham United Blues Football Club is an Australian soccer club from Templestowe, a suburb of Melbourne, Victoria. The club was formed in 1965 by local Italian Australians and was formerly known as Fawkner Blues.

In 2010, Fawkner SC split from the club. Manningham United plays their senior games at Park Avenue Reserve while the majority of their junior games are played at Timberidge.

In 1999, the club, originally known as Manningham Juniors Soccer Club, had just three junior teams, with a committee led by Paul Martinello and Tari Mallia.

In 2004 Fawkner Blues merged with Whittlesea Stallions to form Fawkner-Whittlesea Blues. Their home games were played at Whittlesea's home stadium Epping Stadium. The merge only lasted until 2006. The club played in the 2005 and 2006 Victorian Premier League. In 2005 they finished fourth but only six points from first. The following year, the final year before Fawkner-Whittlesea dissolved, it finished 10th. At the end of 2006, Fawkner opted to go back to being a stand-alone club and Whittlesea forming a partnership with Bulleen Lions to form the Whittlesea Zebras, who have been known as Moreland Zebras FC since 2011.

In 2013, Manningham were playing in the Victorian State League 5 and had finished 5th. Fawkner on the other hand playing in State League 1 would finish dead last, below Eastern Lions by 6 points.

The season before the merger, Manningham had just escaped the bottom of the ladder finishing above Brandon Park who only managed one win in the entire season. Manningham ended the season on 19 points with 6 wins and 1 draw. In the 2014 season Fawkner finished 3rd behind Preston Lions and Moreland City.

On 27 November 2014 it was announced that Manningham United, a then Victorian State League 4 team would merge with Fawkner Blues, a State League 1 team, and Manningham United Blues Football Club was born. In 2014 they fielded 30 junior teams and have grown to be the biggest community club in Manningham. They moved from CB Smith Reserve which Fawkner SC now plays at to play at Mannigham's ground Timberidge or alternatively Wilson Road Reserve. In its inaugural season Manningham finished a disappointing 10th. In 2016, it finished in fifth.

In the first season of the merger, Manningham United Blues would finish 10th.

Manningham's seniors had a relatively slow start to the season with only two wins in the first five matches. however form hit when they won six matches in a row from round 7–12 and were only stopped by eventual winners Mornington SC. It looked at that point even though there was a loss to Mornington there was still a good chance of a high place finish or even the title. However, with one win in the last five matches including a 3–3 draw to bottom side Frankston Pines FC a fifth-place finish would ultimately be disappointing for Manningham.

In 2018, Manningham achieved promotion from State League 1 to the National Premier Leagues Victoria 2 with a league championship. Dean Lorenzi finished as the club's and league's top goalscorer with 21 goals.

Manningham United reached an agreement with the Veneto Club in Bulleen, Victoria to play its senior home games for the 2019 season.