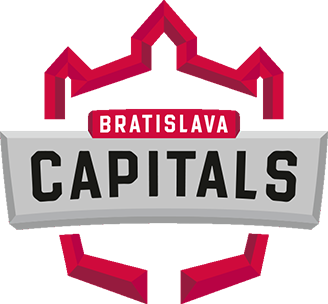 The Bratislava Capitals are a professional Slovak ice hockey team based in Bratislava, Slovakia. They currently play in the ICE Hockey League in Austria. The team was established in 2015.

Club HC Bratislava established in 2015 in response to the missing Bratislava senior team in Slovak competitions. In the premier season in the second league of hockey, 16 participants were placed in 12th place. In the 2016/2017 season, the club found a stable background in stadium Vladimír Dzurilla Arena in Ružinov. The club stabilized, established itself in the second league of hockey and ranked fourth among 20 teams. In the season 2019/2020, the begins a new history of HC Bratislava. The club went through a complete rebranding, including a change of name of the club to Bratislava Capitals, under which it will operate in the next season. In 2019–20 season they started play their home matches at Ondrej Nepela Arena, also known as Slovnaft Arena. Team also signed many players from Tipsport liga, probably the biggest name is Canadian player Eric Selleck.

After the 2019–20 season, the Capitals were accepted to play in the Austrian based bet-at-home ICE Hockey League (formerly the Erste Bank Eishockey Liga) on 24 April 2020 for participation in the 2020–21 season.