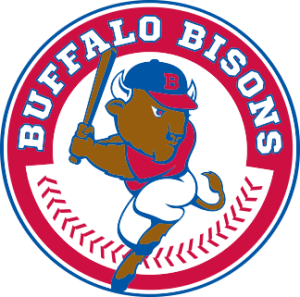 The Buffalo Bisons (known colloquially as the Herd) are a Minor League Baseball team of the International League and the Triple-A affiliate of the Toronto Blue Jays. Located in Buffalo, New York, the team plays their home games at Sahlen Field, the highest-capacity Triple-A ballpark in the United States.

Mayor James D. Griffin and an investment group purchased the Jersey City A's of the Double-A class Eastern League for $55,000 in 1978, and the team began play as the Buffalo Bisons at War Memorial Stadium in 1979. This new franchise assumed the history of prior Buffalo Bisons teams that had played in the city from 1877 to 1970. Robert E. Rich Jr. purchased the Bisons for $100,000 in 1983, and upgraded the team to the Triple-A class American Association in 1985 after buying out the Wichita Aeros for $1 million. Rich Jr. grew the team's popularity and was known for his innovative promotional tie-ins, most notably an annual series of post-game concerts by The Beach Boys.

The Cleveland Indians replaced the Pittsburgh Pirates as Major League Baseball affiliate of the Buffalo Bisons prior to the 1995 season. The team won division titles in 1996 and 1997, and won the final American Association championship in 1997. Bartolo Colón threw the first no-hitter in franchise history on June 20, 1997 against the New Orleans Zephyrs.

In wake of the American Association disbanding following the 1997 season, the Bisons joined the International League in 1998. The team won the division and league championship in their first season, but lost the Triple-A World Series. The addition of regional rivalries allowed for the creation of the Thruway Cup, an annual competition between the Buffalo Bisons, Rochester Red Wings and Syracuse SkyChiefs. The Bisons went on to win division titles in 2000, 2001, 2004, 2005, and the league championship at home in 2004.

The New York Mets replaced the Cleveland Indians as Major League Baseball affiliate of the Buffalo Bisons prior to the 2009 season. This era was plagued with poor on-field performance and low attendance.

The Toronto Blue Jays replaced the New York Mets as Major League Baseball affiliate of the Buffalo Bisons prior to the 2013 season. To kick off this era, the Bisons scored 27 runs on 29 hits against the Syracuse Chiefs on April 18, 2013, setting records for the most runs and hits in an International League game since 1973. The Blue Jays used Sahlen Field as their home field in 2020 after the Bisons season was cancelled due to the COVID-19 pandemic, investing $5 million in upgrading the venue.

In conjunction with Major League Baseball's restructuring of Minor League Baseball and the closure of the International League, the Bisons joined the newly formed Triple-A East in 2021. Due to renovations at Sahlen Field as well as use of the stadium by the Blue Jays, the Bisons began their 2021 season at Trenton Thunder Ballpark in Trenton, New Jersey. At their home games, they wore the uniforms of the Trenton Thunder and were referred to as such. On the road, they were still known as the Buffalo Bisons.

The Bisons returned to the International League in 2022.